Why MHFA England needed to march at Pride 2018 For the first time ever, MHFA England was this year represented at the Pride in London march. Leading the charge was Nicola Chamberlain, Client Relationship Executive. Here's why she felt compelled to make sure that MHFA England was a part of the celebration.

As a femme lesbian woman Pride is incredibly important to me, but I have only discovered how important in recent years. For me, Pride allows me to be completely relaxed in my own skin – I am able to hold my wife’s hand, or kiss her without second thought. Even on my way to Pride this year, we were given a discerning glance by a gentleman as we walked to the bus stop, hand-in-hand and in (rather understated) rainbow-themed clothes. So often we have to check who’s around before we embrace, or research holiday destinations to make sure we’d be welcome and safe. Things that my straight friends have told me they wouldn’t even have thought about.

Twelve months ago, I stood on a traffic barrier with my wife watching the Pride in London parade, when she turned to me and said “Why are you guys not marching here?”. She meant my organisation, Mental Health First Aid (MHFA) England. At that moment I decided that we would be next year – we needed a presence at the parade, especially when you consider that the LGBTQIA+ community is often subjected to a number of life experiences that can contribute to mental ill health. Stonewall states that people who identify as lesbian, gay or bisexual are twice as likely as heterosexual people to attempt suicide, and more than 60 percent of Trans people have attempted suicide. Mental health organisations do march, but I noticed that year that there was very limited representation. With LGBTQIA+ people being at a significantly higher risk of experiencing mental ill health due to homophobia, biphobia, transphobia and bullying, amongst other contributing factors, it’s important that we play our part in supporting the community and promoting MHFA for all.

As an organisation we are very inclusive. We also have a diverse workforce and a higher than average number of employees who identify as LGBTQIA+. It was no surprise then, that when I mentioned my plan of marching over a drink (or three) at our Christmas party, I was met with nothing other than enthusiasm and encouragement from our then CEO and directors. That was it then, we needed to make it happen! 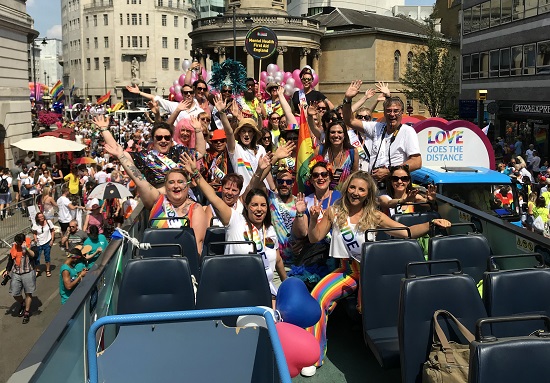 We’re a small organisation, having grown from around 30 to 60 in the last year – but being small doesn’t stop you from being able to have an impact, especially with such an important message to bring. When I set about creating a business case and submitting our application to Pride in London, I was determined that we should march with a float. I wanted MHFA England and the LGBTQIA+ community who may experience mental ill health to have as big a platform as possible. I also wanted a guest – not just any guest, but one with links to both the LGBTQIA+ community and to mental health. Sure enough, by March this year it was confirmed that we would be marching with a double decker bus. Soon we had also signed up our first guest, Jazmine Franks. Jazmine played Esther Bloom in Hollyoaks for seven years, a lesbian character who attempted suicide due to bullying. As a LGBTQIA+ ally and with a passion for mental health, she was the perfect person to join us on the day.

Six months of hard work later, there we were: piled on to and around a double decker bus, sweating in 32°C heat, and running on pure adrenaline. We’d had a few disasters leading up to the event – a key one being the bus company cancelling less than 24 hours before the parade – but we weren’t going to be stopped. The sun was hot but the energy was hotter. We marched in fifteenth position (out of 471 groups) and were met with positivity, love, cheers and smiles along the 1.4 mile route. There were protestors present, but that didn’t dampen the spirits of the 29,330 marchers and over one million supporters. The atmosphere was beautiful and all the marchers experienced specific moments that stood out, and had genuine, intimate connections with people in the crowds.

No words can describe the feeling of looking out over and interacting with so many people who share your thoughts, your experiences and your love. It was overwhelming in the best possible way. People were celebrating; people were showing their support for not just the LGBTQIA+ community, but for mental health too – they were appreciative of being represented, and we were appreciative that they were so responsive. We were so prepared with water, food and face paints – but the most in-demand item that we’d all forgotten was tissues. Tissues for tears of happiness, emotion, love and sadness that Pride events are still needed. 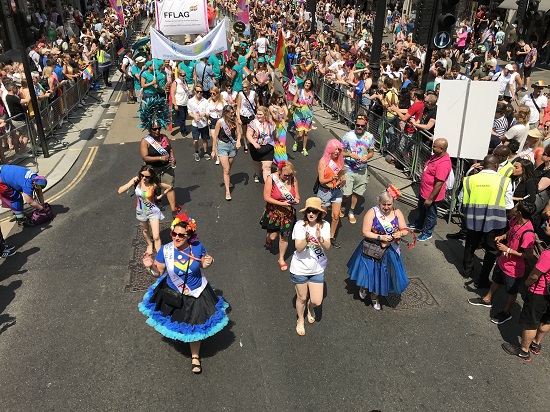 We regrouped on the South Bank after the parade and reflected over ice cold drinks and good food; sharing in the positivity and love of the day. We were exhausted, but completely energised at the same time. Yes, things had gone wrong, but nothing mattered when there was so much support across the city.

Our guest, Jazmine, said: “I’m honoured to have been asked to march with MHFA England at this year’s Pride in London parade! Not only did I get to walk alongside a community I love, I had the privilege to walk with a group of people raising awareness about mental health and helping to break the stigma on something I feel passionately about. I was overwhelmed by the amount of people that turned out to celebrate Pride; the crowds were incredible and I can’t thank MHFA England enough for allowing me to be a part of such a special day!”

It was worth every second of stress, hard work and every sleepless night even if we make just one person realise that they are not alone. We all have mental health, and that includes the LGBTQIA+ community – let’s support each other to look after it.

To help make first aid for mental health a legal requirement for all workplaces and colleges, you can sign our petition here.