Where's Your Head At? 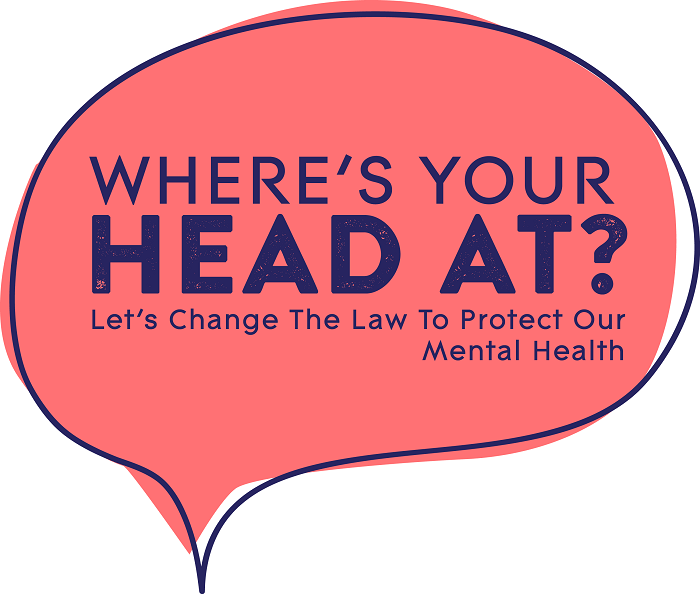 “Where’s Your Head At?” is calling for employers and politicians to commit to treating mental and physical health equally in the workplace.

The group is leading calls from the public and employers for a change in legislation to ensure the Health and Safety First-Aid Regulations 1981 are explicit that First Aid obligations relate to both our mental and physical health.

"Where's Your Head At?" is also calling for organisations to strive to implement the Thriving at Work review’s six core standards for a mentally healthy workplace, which include raising mental health awareness and encouraging conversation about the support available.

At the centre of the campaign is a vision of a mentally healthy working world where people’s mental health is supported and protected, and where wellbeing is at the heart of all we do. In this world:

Its calls are supported by a public petition and Workplace Manifesto, which continue to receive overwhelming support from the general public, employers and politicians. To date over 200,000 people have signed the petition, whilst 80 MPs and around 500 employers have given their backing to the campaign’s Manifesto. 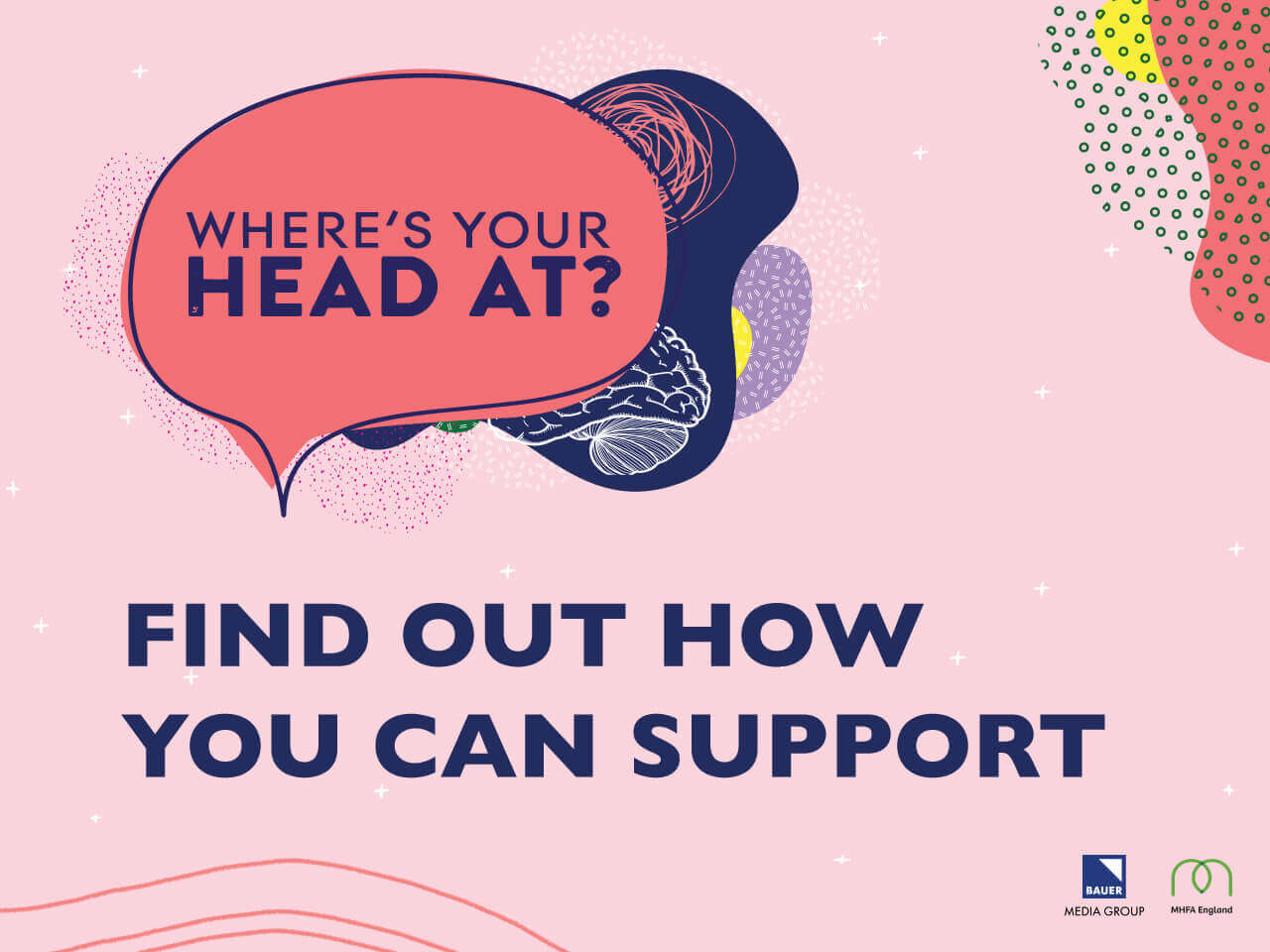 A new law requiring businesses to offer mental health first aid training was presented to Parliament on Wednesday 25 January 2023 by Dean Russell, MP for Watford. In an exciting development, the Private Members’ Bill (under the Ten-Minute Rule) was passed and will now be presented to Parliament for a second time. The proposed reading will take place on 24 February 2023.

Whilst there is still some way to go before this would become legislation, this is a moment to celebrate as we move forward in our collective journey towards improving the mental health of the nation. You can follow the progress of the Bill here.

If you want to raise awareness of the proposed Bill, please contact your local MP using our downloadable template here and ask them to support it.

In 2018, MHFA England, Bauer Media and Natasha Devon joined forces to launch the Where's Your Head At? campaign to change the law around Mental Health First Aid provision in the workplace. This recent Bill reading brings us a step closer to enshrining equality between Mental Health First Aid and Physical first aid in the workplace. Both are equally important and inextricably linked.

November 2019: Call on candidates to sign the Workplace Manifesto

Ahead of the 2019 General Election, ‘Where’s Your Head At?’ called on candidates to show their support for workplace mental health by signing up to the campaign’s Workplace Manifesto.

To date 80 politicians from across the political spectrum have signed up alongside nearly 500 employers.

September/October 2019: ‘Where’s Your Head At?’ goes on the road

Through Mental Health First Aid (MHFA) England, ‘Where’s Your Head At?’ attended the Labour, Liberal Democrat and Conservative Autumn party conferences, with over 50 MP’s signing up to the campaign’s Workplace Manifesto.

Each party took the opportunity to provide Mental Health First Aiders for the first time, building on commitments to work towards parity of esteem.

Fringe events involving panels of experts and MPs were also convened at each conference to discuss the importance of taking action on mental health in the workplace. You can watch these in full on the MHFA England Youtube Channel.

To celebrate its first birthday, ‘Where’s Your Head At?’ launched a new Workplace Manifesto. The campaign is calling on employers and MPs to lay down their commitment to workplace wellbeing by signing up.

The Workplace Manifesto is a mission statement for a healthier working world - where people’s mental health is supported and protected and where wellbeing is at the heart of all we do. To date, dozens of MPs and nearly 500 organisations have signed up to show their support.

Visit wheresyourheadat.org to find out how you, your organisation, or your MP can sign up as an official supporter of the ‘Where’s Your Head At?’ Workplace Manifesto.

See the list of everyone who has supported the Workplace Manifesto so far.

Mental health first aid in the workplace was debated in Parliament, with MPs from across the five main political parties speaking in support of the issue. The speaker concluded that the ayes had it, signalling the majority view that First Aid regulations need to be updated to put mental and physical health on an equal footing.

Despite the overwhelming support for legislative change, the Government Minister for Mental Health, Inequalities and Suicide Prevention did not speak in support of the motion, but did agree that more debate was required on the issue of mental health in the workplace. For the full story, see our news article here.

The campaign so far has ensured that the topic of mental health in the workplace cannot be ignored and has resulted in the announcement that a parliamentary debate on mental health first aid in the workplace has been scheduled. This is currently due to take place in the House of Commons on Wednesday 19th December.

With clear support for the issue across the political spectrum and among the general public, more than 50 leaders from across business, education and the third sector wrote an Open Letter to the Government highlighting their support for the Where's Your Head At campaign's call to put mental and physical first aid on an equal footing in the workplace.

8 October 2018: Where's Your Head At? goes to Westminster

Ahead of World Mental Health Day 2018, the 'Where's Your Head At?' campaign's progress was celebrated at a special event held at Portcullis House and hosted by Luciana Berger MP.

Following this Luciana, Natasha and members of the campaign team from Bauer Media and MHFA England presented the campaign petition, with over 200,000 signatories, to No.10 Downing Street.

Mental Health First Aid (MHFA) England, Bauer Media UK and Natasha Devon MBE launch 'Where’s Your Head At?' – a campaign calling for first aid regulations to be amended to ensure that provision is made for mental health, as well as physical, first aid in the workplace.

If successful, this change in law would mean that millions of working people have access to mental health first aiders, as they currently do for physical first aiders. We all have mental health, so let’s change the law to reflect this.

The campaign's change.org petition has been signed by over 200,000 people - highlighting a groundswell of public support for the issue. Since going live a host of celebrities, MPs and the Mayor of London, Sadiq Khan have also shown their support for the campaign. 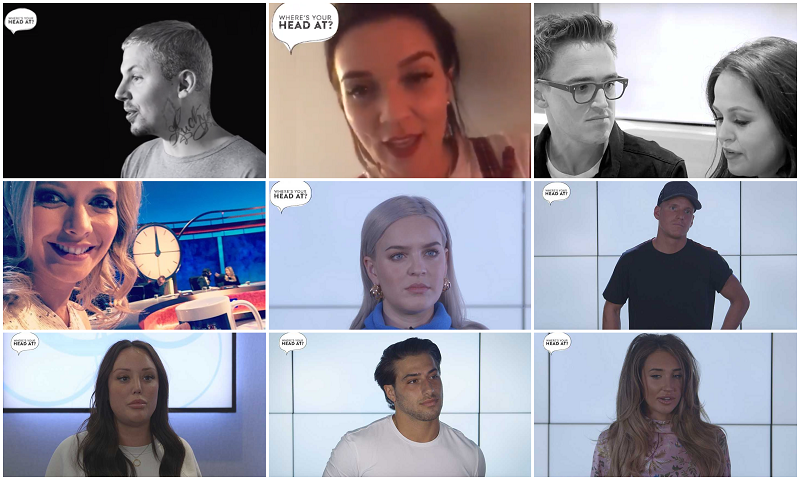