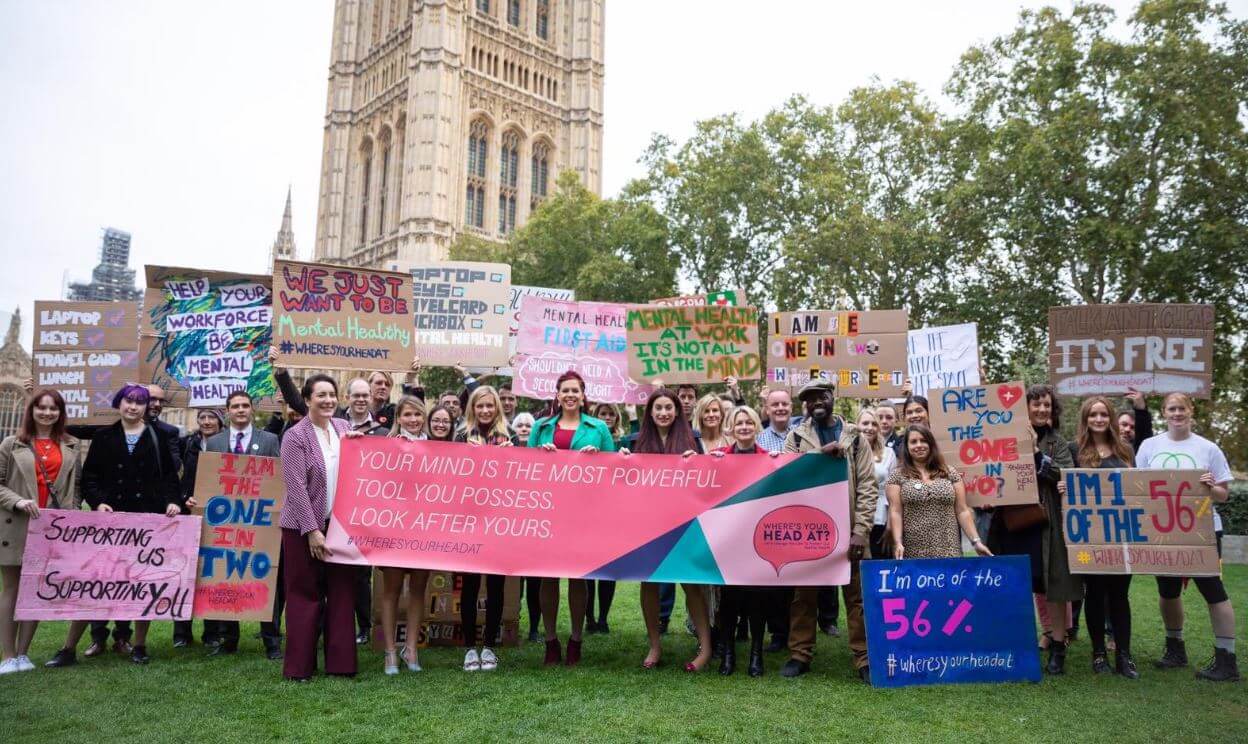 What a great way to start a job - straight in at the deep end. When I suggested my start date of October 3rd I didn’t realise it was World Mental Health Day on the 10th.

Luckily learning by doing suits me. Last week kicked off with a photo shoot on College Green followed by a parliamentary reception hosted by Luciana Berger MP and a trip to Downing Street to deliver an important petition.

Since May 2018 we have been working with mental health campaigner Natasha Devon and Bauer Media Group to gather support to make provision of Mental Health First Aid (MHFA) compulsory for employers. Over 200k people have signed a petition (you can add your name here if you haven’t already) to support the call. Alison Garbutt from WHSmith gave a very moving and powerful account of the impact MHFA has had on her individually and on the organisation as a whole.

A huge thank you to all those who helped to make the event such a success and to everyone who has shown their support for the campaign and our petition.

Later that day I was part of a panel at the RSA talking about whole school approaches to mental health. The RSA published a report following their pilot intervention in 7 RSA Academies in the West Midlands. Many of the conclusions in the report were similar to the learning from the National Healthy School Standard (NHSS) evaluation, and my experience as NHSS Assessor. Throughout the discussion it was clear yet again that there is no magic bullet to improving mental health, and for any mental health intervention to work you need strong leadership, the belief and determination of a committed and brave group of people who are willing to take some risks and learn fast.

Tuesday was day one of a two day inaugural Global Ministerial Mental Health Summit with a theme of creating equity for mental health in the 21st Century. With delegates from 58 Countries around the world it was an excellent induction into the similarities and differences around the globe. Over the two days I learnt a little bit more about the enormous amount of things I need to know much more about!

Matt Hancock, Health Secretary and Simon Stevens, Chief Executive of NHS England were amongst the Summit’s closing speakers. Mr Hancock set out a series of rhetorical questions about whether enough had been done to create parity of esteem. Whilst Mr Stevens suggested that social media firms should pay a levy to fund mental health treatment and research.

Some highlights for me included learning about the excellent suicide prevention work in North Korea, the city wide Thrive programme in New York City and the role Mental Health First Aid plays in their city wide programme and Black Thrive here in London. It was also a real pleasure to meet my MHFA counterpart in Bangladesh.

You can read my statement about the Summit and the Declaration here. The Netherlands has agreed to host the Summit in 2019. Hopefully the fact there is another Summit will be a driver for action.

There were many great packs and resources produced. I was of course particularly pleased to see two of my great passions - horses and mental health - come together with the British Grooms Association launching Grooms Minds Online for Grooms who need help.

After the Summit, we headed over to No.10 to hear the Prime Minister set out why mental health prevention is important to her, and set out her stall including ensuring explicit Ministerial responsibility for suicide prevention. After three days of pretty intense learning curve I was pleased to be doing a RunThrough club run that evening. Especially as I was kitted out in a Young Minds yellow t-shirt gifted by Emma Thomas, CEO of Young Minds at No. 10.

Thursday and Friday: two days of meeting colleagues and teams at MHFA England, catching up on emails, writing a couple papers and planning.

This week I am looking forward to some more time doing the above, spending time with the Leadership Team and meeting colleagues who are using MHFA in the University Sector.

Thanks to the team at MHFA England for the warm welcome and to everybody at MHFA and beyond who are continuing to answer my endless questions.