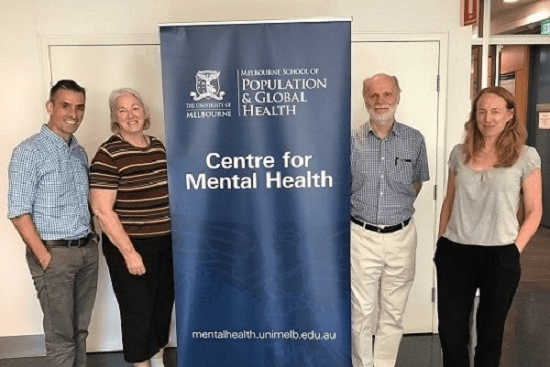 I am writing this blog from Melbourne airport. Hard to believe that this trip is over so quick.

My last MHFA meeting was with Shona, the (new) CEO of MHFA Australia. I have really enjoyed spending some time with Shona this week sharing ideas and understanding. And I am both inspired and energised by the future possibilities for collaborating, sharing and learning as part of the International MHFA Community.

It was an absolute pleasure to meet the founder of, and original brains behind MHFA, Betty Kitchener yesterday. I am delighted that I now have, on my person, a copy of the very first MHFA Manual. I truly believe that if you understand the history, you are better placed to understand and imagine the future. So hearing Betty and her husband Tony Jorm describe first-hand their very first conversation where the MHFA idea was planted, and their subsequent journey from then to now – a journey characterised by hard work, creative thinking and determination that has transformed MHFA from an idea to the evidence-based global programme it is today – was a real pleasure.

I asked both Tony and Betty if they could single out a moment of pride, what it would be. After some serious deliberation they both ultimately agreed that publishing the second manual was a magical moment, because it was built on lots of learning and a stronger evidence base. A ‘maturing moment’ for MHFA that they were rightly very proud of.

Nicki Reavely who heads up the Centre for Mental Health, at the University of Melbourne also joined the meeting. We talked a lot about the evidence base, the different research and evidence that underpins MHFA, and about MHFA programme affinity. Nicki is currently leading some really exciting research on MHFA in middle and low income countries. We discussed the MHFA England research that the Centre for Mental Health is leading for us on, which looks at the impact of MHFA on those who receive support from a MHFAider in the workplace.

Tuesday I met with two of the MHFA Australia trustees. As well as discussing MHFA Australia, the Global Community and the specifics of our work at MHFA England, the Where’s Your Head At? campaign and Brexit, I learned that there are two important commissions looking at mental health.

One is the Productivity Commission and the other a Royal Commission for Mental Health in Victoria.

Beyond the MHFA family I spent some time with Sam Rosevear, Head of Policy and Strategy at Beyond Blue. Set up by Jeff Kennett, a previous Premier of the State of Victoria, Beyond Blue has been instrumental in changing the national conversation on mental health.

Julia Gillard, the previous PM of Australia is Chair of Beyond Blue. On realising this I revisited her ‘misogyny speech’ in Parliament, which you can watch here:

Having worked in sexual health for 21 years I was excited to have an unexpected sexual health fix this week. Just short of a decade ago I did some training and consultancy work for Family Planning Victoria on condom distribution schemes, and young men, sexuality and masculinity. Now a friend and colleague from the Sex Education Forum, Sarah Woolf is a director there, so it was a nice surprise on landing in Melbourne to find that their 50th birthday party was taking place today. And I had time to do a quick scoot across to the reception before heading to the airport.

And here I am at the airport. Tired, slightly discombobulated from persistent jet lag and lack of sleep this week, and above all excited about the work we will do with MHFA Australia and the International Community.