MHFA England marks a decade of its community's work 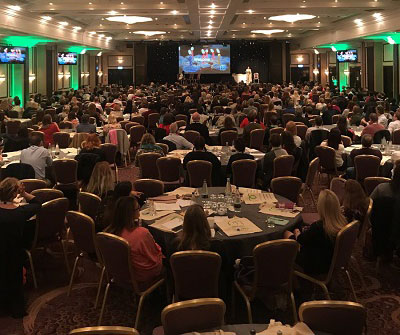 On Wednesday this week Mental Health First Aid (MHFA) England celebrated a decade of MHFA training in England. To mark this milestone, the organisation’s community of instructors and advocates converged on the National Conference Centre in Birmingham for a day of networking, workshops, exhibitions and awards.

It was ten years ago that the organisation’s founding members undertook instructor training, becoming some of the first people in the country qualified to deliver MHFA courses. Two years later MHFA England was founded as a community interest company (CIC) with a mission to raise mental health literacy and train one in ten of the population of England in MHFA skills. Since then the organisation has grown from a small social enterprise with three full time employees and only a handful of instructors, into a successful CIC with a central team of nearly 50 staff and an active instructor community of over 1,300 who have trained over 218,000 people.

Hosted by ITV Central News presenter, Sameena Ali-Khan, the day itself began with an opening address from Poppy Jaman, CEO of MHFA England. Poppy traced MHFA England’s journey from its beginnings as a start-up to the leading training organisation it is today, and set out her vision for the next ten years and the work still to be done to achieve the one in ten target.

Following Poppy’s speech Sameena interviewed award-winning mental health campaigners Jonny Benjamin and Neil Laybourn, who shared their moving story of how simply asking a stranger “Are you alright mate?” saved a life, started an inspiring friendship and a ground-breaking movement of suicide prevention. This was followed by an awards presentation to recognise the contributions of different instructors, including accolades for ‘Most Supportive MHFA Friend’ and ‘Most Innovative Delivery of MHFA’.

Throughout the day a wellbeing exhibition was held for delegates to learn more about other partner organisations and advocates of MHFA. These included Birmingham Mind, Action for Happiness, Shine Offline, Royal British Legion, Teach First, Unmind, Place2Be and Street Games. Following a break for lunch, a Q&A involving MHFA England’s executive team took place in which instructors’ questions were put to the panel. The audience then split up to attend a workshop of their choice, with sessions run by the likes of Action For Happiness, the project team for the Youth MHFA in Schools programme and MHFA England’s Client Experience Team.

Commenting on the day’s events Poppy Jaman, CEO, MHFA England, said, “It’s been a joy and a privilege to mark ten years of Mental Health First Aid in England by celebrating the work of our fantastic instructor community. I never cease to be inspired and amazed by the work they are doing in communities all over the country; creating mentally healthier organisations and helping people to better support their own and others’ mental health. I’m immensely grateful to lead and be a part of this amazing group of dedicated, passionate and talented individuals. Together, we will now build on the solid foundations we have laid over the last decade for the next, as we work towards our ultimate goal of training over five million people in England in Mental Health First Aid.”

To find out more about what happened at our anniversary event visit our campaign page: mhfaengland.org/mhfa-centre/campaigns/10th-anniversary