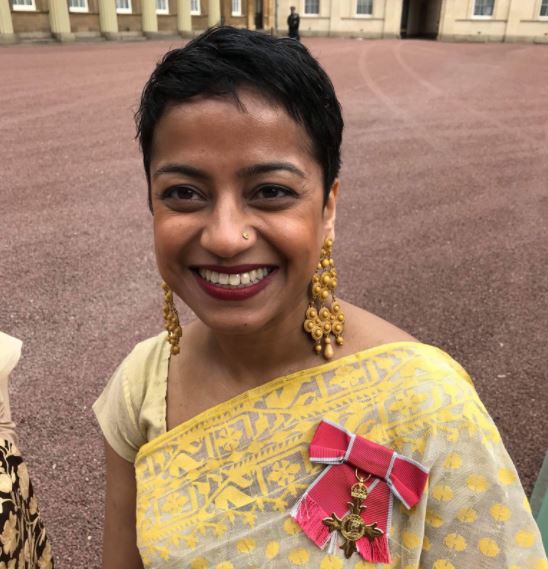 On Tuesday, Mental Health First Aid (MHFA) England CEO, Poppy Jaman, was awarded her OBE by The Duke of Cambridge at Buckingham Palace. Prince William presented Poppy with the insignia in recognition of her services to people with mental health issues.

As an internationally respected mental health advocate, Poppy has over 20 years’ experience of influencing and leading change in public mental health. For half of this time, Poppy has helped lead the development of the MHFA movement in England, turning it from a small government project into a fast-growing, commercially successful Community Interest Company.

Alongside her work with MHFA England, Poppy is CEO of the City Mental Health Alliance, a coalition of City businesses working to increase understanding of mental health issues and to create a culture of good mental health in the City. She also sits on the board of Public Health England (PHE) as a non-executive director (NED), advising on public mental health and community development, and is also the PHE lead on Diversity and Staff Inclusion. Further to this, Poppy sits on the board of The Diversity Recruitment Institute of Value and Excellence, a social enterprise set up by recruitment consultancy Green Park, as a mental health advisor.

On receiving her award, Poppy said, “I’m absolutely thrilled to be among the many talented and dedicated individuals recognised in 2018's New Year’s Honours for their contributions to public life. The very fact that mental health advocates are beginning to be recognised at this level is an indication of the progress our whole community has made in recent years to change public perceptions of mental illness and mental health. It’s truly a privilege to receive this honour."